In 2002, after getting encouragement from the local chiefs and from the Oyo State government, we started with 25,000 seeds purchased from the Nigerian Institute For Oil-Palm Research (NIFOR), building a nursery on the grounds of the Good Samaritan Mission Village in Fiditi, Oyo State, Nigeria. 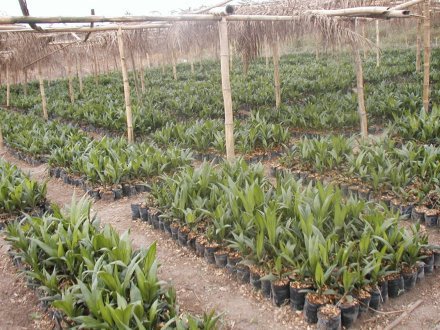 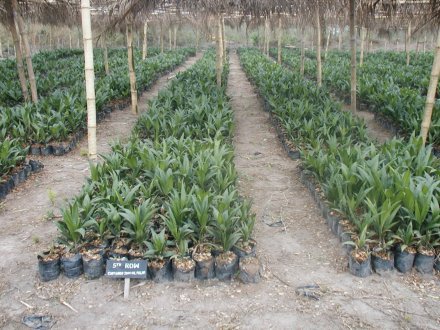 Nursey of approximately 25,000 seedlings, October 2002. Another view of the Nursery, on the site of the TGSSA Mission Village.
Agreements with landowners and local chiefs were negotiated in the fall of 2002, and clearing started, once the dry season began, in Februrary of 2003. Some clearing was done by hand, but some was done by a (somewhat breakdown-prone) bulldozer. 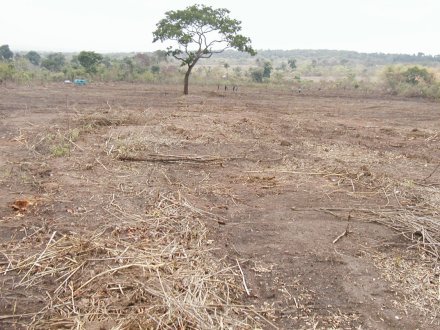 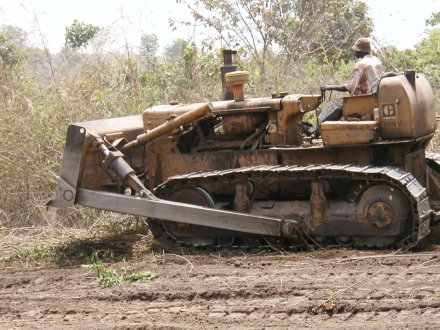 Our Awe farm is currently the largest, just over 100 acres. The bulldozer was not very reliable, but did a good job leaving most of

the topsoil.
Roughly 17,000 seedlings survived their year in the nursery, and about half of them were moved into one of four farms between June and September of 2003. The following pictures show how the farms looked in February of 2004. 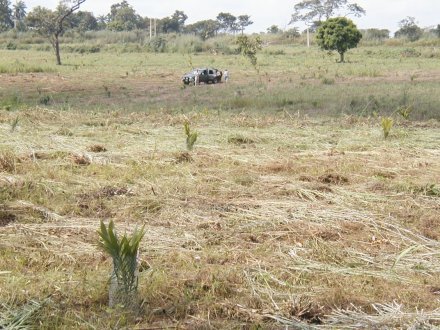 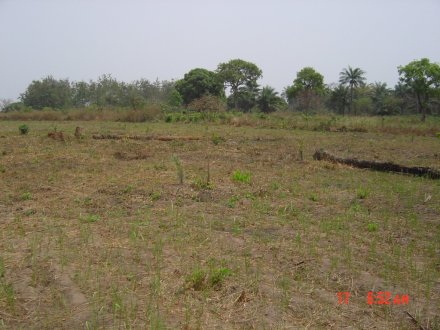 The farm at Awe. Chicken wire protects the seedlings from rodents. Ogunkunle's farm, with a couple of downed trees among the seedlings. 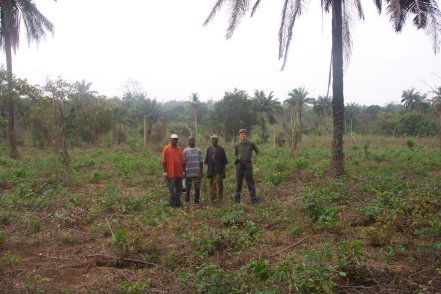 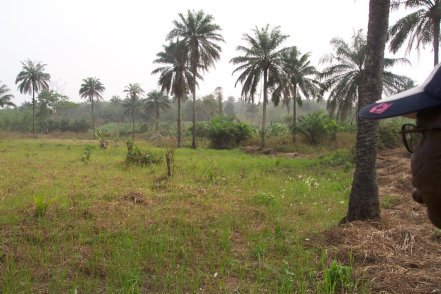 Elder Michael, Manager Segun, Deacon Olaoke and I at Olaoke's farm. Michael is surveying the seedlings at the Omodeni (I) farm.
Meetings with the local chiefs councils were important at the early stages of the project, and we have continued to keep in contact. 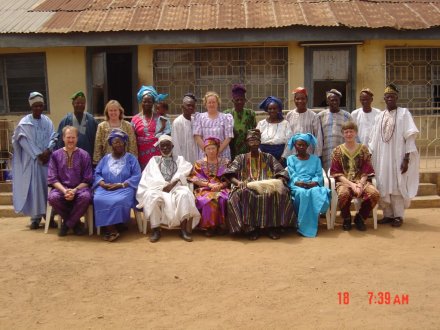 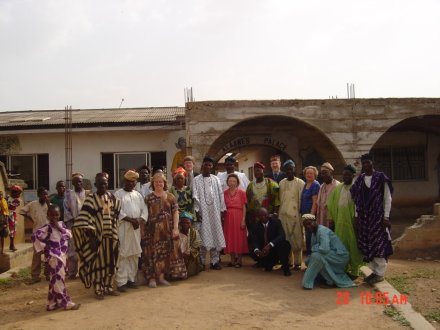 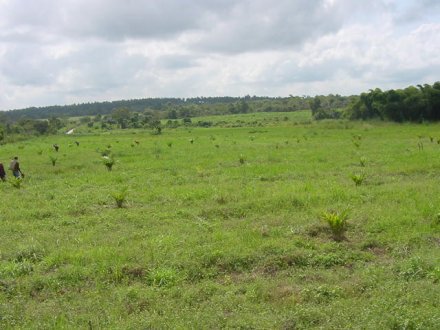 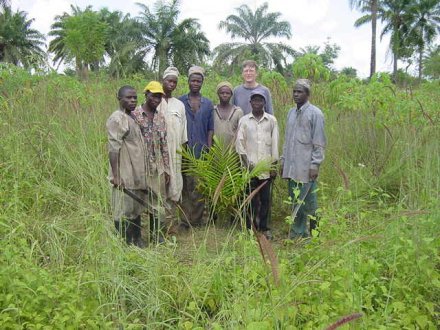 Awe farm being cleaned in November 2004.
Work crew at a newly planted tree at the Omodeni 2 farm.
The trees by 2005 had grown a great deal, and we began to see some fruit on the trees. Also, to reduce maintenance costs, we arranged for significant parts of the various farms to be cultivated by local farmers, who kept the area clean and received the benefit of the harvest. A variety of crops were used, including Casava, Maize, Tomatoes, and Peppers. The trees benefit from the reduced competition and especially reduced fire hazard. 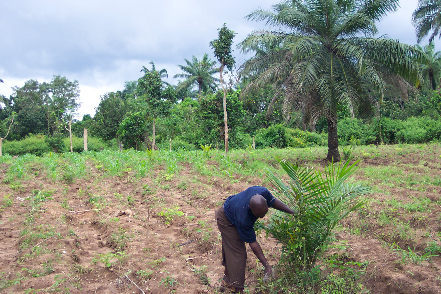 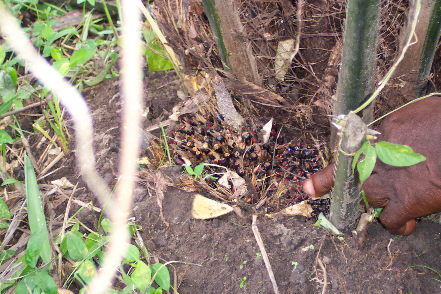 An area of the Awe farm being cultivated and kept clear by a local Some early fruit at the Awe farm (Oct 2005).
farmer. 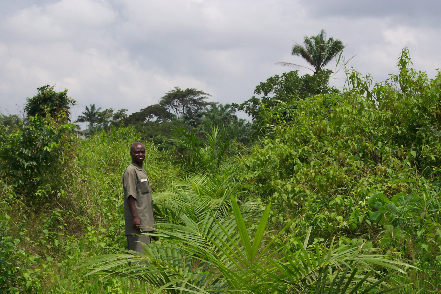 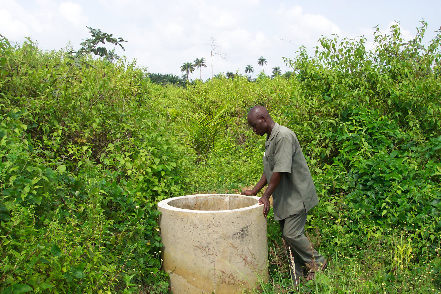 A row of weeded trees at the Ogunkunle farm.
We put in wells at most of the farms in order to have local access to

water. This is the well at Omodeni 1.
Despite our efforts, we were hit by a pretty serious fire at the Awe farm in February 2006. Although many of the trees recovered thanks in part to some unseasonal rain that fell shortly after the fire, the fruit production in 2006 and especially early 2007 was seriously impacted. In an effort to further improve our clearing and fire prevention capabilities, a pair of Jari sickle mowers were shipped over in June 2006, arriving in November 2006. More details on the mowers can be found in the 2006 report. In the end, however, they are not well-suited to the task of clearing the jungle around the trees. 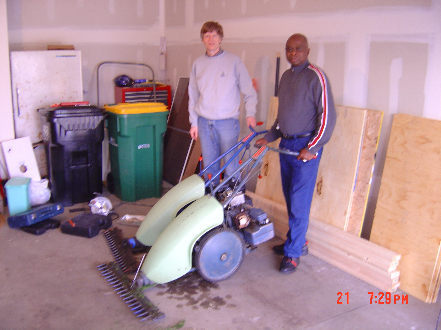 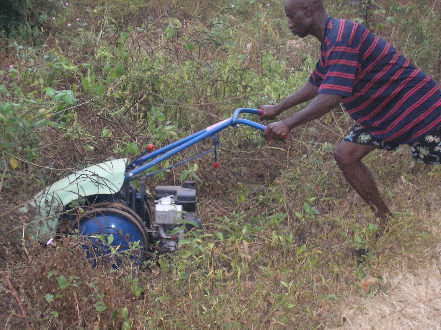 The two mowers in the U.S. just before being crated up and shipped. Segun Opatola, our plantation manager, trying out one of the mowers.
Partly due to the fire, not a lot of fruit was ripening on the trees in November 2006. Some trees escaped the fire, though, and a few had a nice harvest of bunches. In April 2007, we processed our first set of fruit bunches and produced our first liter of palm oil! 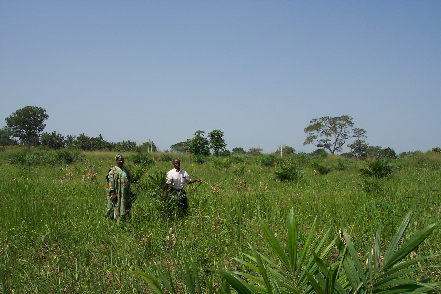 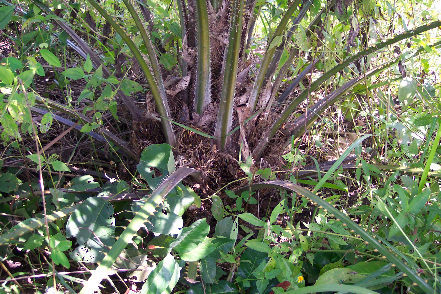 Trees at the Awe farm in November 2006.
A tree at the Awe farm with several bunches ripening.
More fires in February 2007 set back the trees again. Still, much more fruit was seen on trees by October 2007 when compared to a year earlier, and the harvest reached nearly 1000 pounds of fruit and produced around 50 liters of oil. 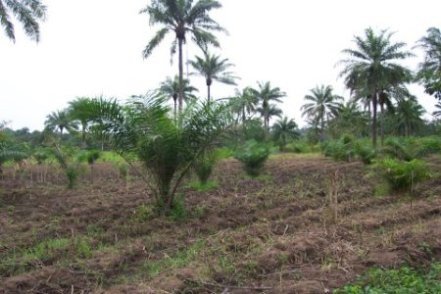 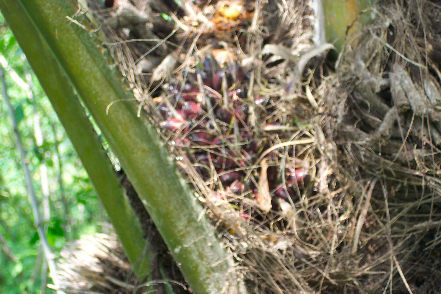