VISION
We envision a medium scale palm oil plantation and mill in Oyo State, Nigeria, including a 1000 hectare (2500 acre) plantation of Tenera-type hybrid oil palm trees producing 5 and 10 million kg of fresh fruit bunches of palm fruit per year, and a mill that will process this fruit to yield more than 1 million litres of cooking grade palm oil annually.

The American-Nigerian Palm Oil Producing Corporation was formed to help bring economic development to the people of rural Oyo State, Nigeria, to provide an example of ethical business conduct, and to assist The Good Samaritan Society of America in its vision to serve these people with education and health care. ANPOP is a for-profit enterprise that will, through its Nigerian subsidiary ANPOP-NAMPOP Ltd, provide jobs and economic stimulus to the area. Once profitable, ANPOP will make significant financial contributions to the programs of The Good Samaritan Society Mission in Fiditi, Nigeria.

STATUS
Currently, we have planted approximately 200 acres with about 8,000 trees, which have been bearing fruit since around 2007. After producing approximately 100 litres of oil in 2010, the production increased exponentially until 2013. Since 2015 we have average a little over 10,000 litres per year in oil production, with a peak of 12,220 litres produced in 2016. Since early in 2012 we have been processing our own fruit, using semi-automated equipment purchased from NIFOR (Nigerian Institute For Oil-palm Research), and installed in our new building on the grounds of The Good Samaritan Society Mission Village. Our tractor and heavy duty disc harrow arrived in 2012 to help keep the farms free from fire and to facilitate additional crop farming in open spaces and spaces between the trees.

See Photos for latest pictures. The mill operation video has also  been updated  - see the Videos page. The 2018 Annual Report is now available on the Reports page.

The following graphs show how the oil production has begun to recover following the decline observed in 2017.

Palm oil production in 2018 was the highest ever through April, but dropped off significantly in May and June, recovering to finish the year about even with the disappointing results from 2017. The production in 2019 has started much faster than any previous year, and while some slowdown is expected in the last half of the year, the projection is to finish slightly ahead of 2016. The primary driver behind recovery of the farm is believed to be the increased investment in farm labor that was initiated in 2018.

Following the April farm visit, the projection was made that the remainder of the year would slightly outpace 2018, but fall well short of 2016, at least in May and June. This led to a season total oil production expectation of 13,000 litres; this projection forms the basis for the calculation regarding how much improvement in the farm can be expected based on the planned level of investment. As can be seen from the updated graph below, oil production is traking slighlty ahead of that end-of-April projection, such that a season total of around 13,600 now seems likely. Accordingly, the plan to continue to deficit spend this year to set up 2020 for success continues to make sense. 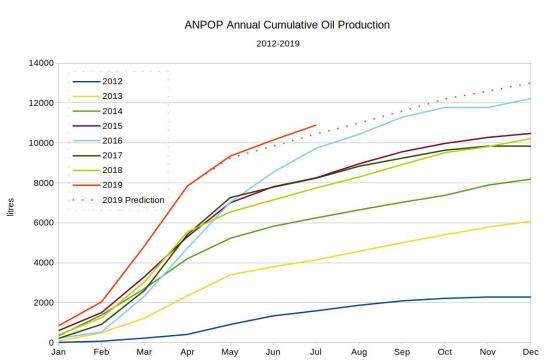 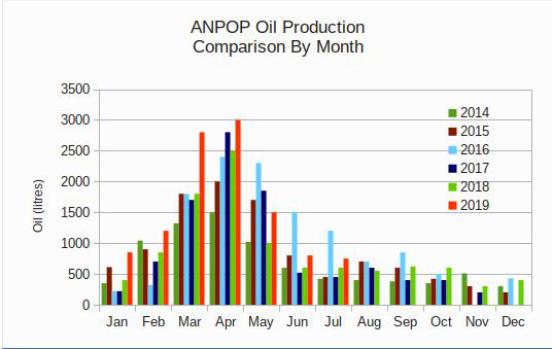 Based on the positive performance of the farm so far in 2019, in what is understood to be a response to the increased farm investment in 2018, the spending for this year is now planned to exceed the budget, increasing the amount of the originally planned deficit. 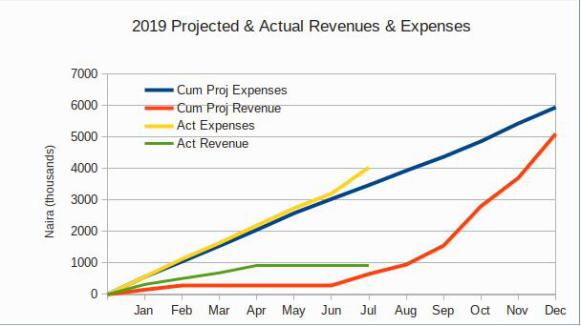 See the History page for a brief photo history of the project. More photos can be found on the Photos page, with a few detailed reports linked under Reports. Check out the Maps and the Videos! Questions or comments? Go to the Contact Us page.

The image below was taken in April of 2018. The large pile of kernels and fibers is waiting for after the peak of the season to find time to sort, dry and crack the kernels. 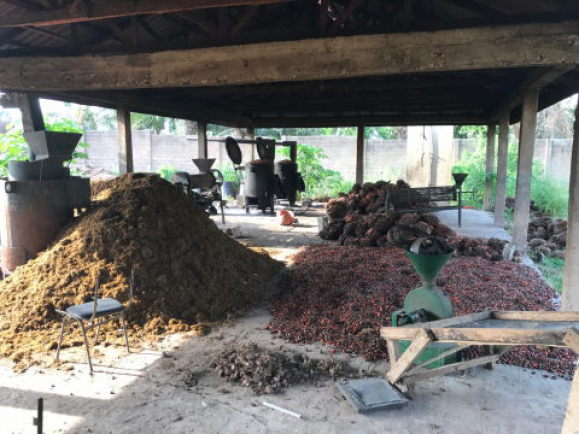